Things are really happening to get awareness about Lyme Disease on the map! I have been waiting and holding on to announce both the events we're working on, but news is starting to filter out about the one already approved.

So, for now ---- here's a graphic to announce the Green Niagara Falls! I've blurred out the second one since we don't have formal approval yet, but wait a while and we should have them both to talk about! Sounds cryptic? Sorry about that, it is really not intentional.

On Friday, May 17, the day before the Brampton Awareness Day Walk, Niagara Falls will be lit in green for 45 minutes in total! 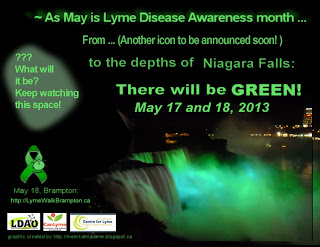 We are talking about arranging a bus to go down from Brampton to Niagara Falls on Friday, May 17, in order to be there for the green-flowing Falls. We can take pictures, make noise, hand out brochures and  make sure people there get the message about Lyme Disease.

Together with various other people like Melisa from the LDAO, people are working on applications and a press release about the other icon to be lit in green. Lots of red tape there! We are not allowed to publish anything until formal approval was given. But as soon as the expected "yes" is given, we'l let you know!

BUS FROM BRAMPTON TO NIAGARA FALLS
I've been on the phone trying to arrange for a bus, but no luck so far. Brampton Transit doesn't go to Niagara Falls and GO buses don't charter their buses. Anyone have any ideas? We need to be there, but not be too tired to come back and be ready for the Brampton Walk the next day!! See the post about the Bus to the Falls as arranged, please.


NIAGARA FALLS WEBCAM
For those who are unable to go to Niagara Falls to see them be lit green on May 17th, they can view it on the live free Niagara Falls webcam.  It may be comforting to see. (Thanks for reminding me to add the link, Doris!) We'll probably gather and meet at the Horseshoe or Canadian Falls at first, but then spread out towards the American Falls. It all depends on how many people show up wearing green and carrying glo-sticks! CLICK: Niagara Falls Webcam

TIME DIFFERENCE
What would be the time difference where you are? We are working in Toronto, Canada time. Here is the Worldclock website for you to check what the time will be for you on May 17, 2013, when it is time for the Falls to go green! WorldClock Link


MY "HOLIDAY" WITHOUT ANTIBIOTICS
It has now been almost three weeks since I've gone off the antibiotics. Things went well the first week, and for half the second week! Then symptoms started coming back. They were mostly just little ones and I ignored them.

On Saturday, while out with friends, all was fine for some hours and then the stiff neck and raised shoulders thing, the creaks and tweaks started again. I ignored it. It got worse. Finally I felt like the bottom guy in a totem pole so asked to be brought home to get warm in bed.

Sunday morning dawned bright and beautiful. Hubby and I shared some scones with strawberry jam and cream for breakfast and discussed various plans. Next moment it felt like I got bitten by a tsetse fly and had to sleep immediately. Couldn't even keep my eyes open properly until back in bed where the sleep came down like in the early days of the onset of this disease. I was so cold even under the duvets and sheets, wearing long flannel pjs, that the fluffy bed socks from South Africa had to come out as well. Thanks, Ma! 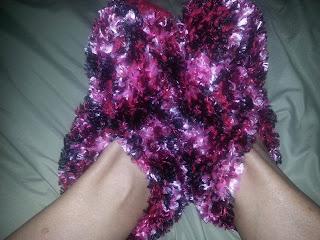 Various aches and pains are returning. A dull ache behind the left eye is noticeable. But nothing like what it used to be and I haven't lost my sight or seen the return of the eye infection.

I'm ignoring these blimps as much as possible! There are things to do, plans to make, arrangements to get sorted out and the body needs a break from the constant onslaught of antibiotics. It might be the Bab-2 drops getting all hot and heavy. Who knows?

CURRENT PROTOCOL
I'm also still using the Auum oil, which I'm convinced protected my brain from being completely ravaged by this disease (read testimonial), Oil of Oregano, Evening Primrose oil, Cats Claw, Resveratrol not from grapes, Vit. C from rosehips, Olive Leaf extract and inject myself with Vit B three times a week. Two or three days ago I also went back on Plaquenil since I was prescribed that anyway for Rheumatoid Arthritis in 2005. It is part of the treatment for Lyme Disease but I wanted to see what would happen without all the pharmaceuticals. Joint pains are becoming worse and hubby, who sorts out my pills, felt the Plaquenil should be brought back into the mix.
If I can hold out until May 8, 2013, without a major relapse, I can carefully consider myself in Remission and hope that gives hope to others.

AN ASIDE
While writing this post, I had a phone call from the credit card people. Seems my card was compromised and used to buy over $500 of shoes from Australia, books all over the place, a Bell order was put in ... so now the card gets cancelled and a whole drama happens. Always something fun to happen somewhere to keep us on our toes!

Posted by MeerkatMarlene at 1:33 PM

so sorry your not feeling so well, praying you will feel better soon
good luck with the Niagara Falls, hope it goes well for you !!!
hugs
Paula

Hi - I saw your post about green Niagara on the lymeaid email list. Props to you for you part in doing that. I've been to the falls a few times and love it there. I'm a lymie that 4 years ago was almost bed ridden and now am 99% healthy and off almost all abx. So... hang in there you WILL get better!
Oh... and I've had a card hijacked too. Don't worry too much about it - the credit card company will cover all the $$, and help you get set up again. The main hassle is if you have the card registered for any auto-payment of bills... the auto payments won't go through (since the card has been cancelled) and you'll get a notice from the company saying you haven't paid your bill. No big deal really.
Hope you feel better, and thanks for being an activist for they lyme cause!

AMAZING news about the Tower! What a persistent and extraordinary grassroots activist you are. Way to go!!
-Dawn Wilson
National Capital Lyme Board of Director

Dunno if my previous comment got out since I wasn't logged in... To reiterate, you are a truly extraordinary awareness activist! To get something this huge done deserves many accolades- congratulations on your hard work paying off! Wonderful!
-Dawn Wilson
National Capital Lyme Disease Assoc Board of Director

Thank you very much, Dawn! The Falls and the Peace bridge were my ideas but the CN tower going green was a concerted effort (http://tinyurl.com/bupcrc2)
I also asked for the Empire State building to go green, writing to them about the Falls, the bridge, and mentioning that we were awaiting to hear from the CN Tower. I thought they would say yes because I had a call from them to ask for more information ... but last week had an email to say no. Ah well. Maybe next year!
Good luck on all you are doing.