Toronto's CN Tower will be green for Lyme Awareness!


Remember the blog post on March 7, where I announced about the green lights on Niagara Falls? I said there is another Canadian icon waiting in the wings, but we were not allowed yet to announce what it was. Today it was finally confirmed, but we've changed the date to coincide with WorldWide Lyme Disease Awareness and the lymeSAVERS Lyme event in Whitby on the same weekend.

CN Tower lights will be green on the night of May 11!

People who can't get to Whitby, Niagara Falls, or Brampton for the other Lyme events might be able to take public transport or somehow get to the base of the CN tower on May 11. There is a wide open space, it is close to Union station and we could really make an impact there. Hopefully there will be media interest. 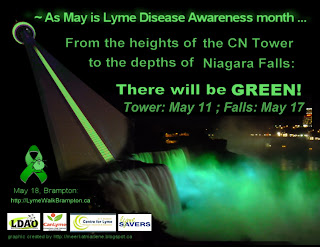 Since then, the Tower has added the following distinctions:
-World's highest 'wine cellar' - 351 metres (1,151 ft.)
-On November 8, 2011 EdgeWalk at the CN Tower was presented with the Guinness World Record for the “Highest External Walk on a Building”.
Read more ...

WARNING TO ONTARIO'S MINISTER OF HEALTH
If you didn't get to hear the interview on AM740 today with Dale Goldhawk talking to CanLyme's Jim Wilson, you can hear a podcast online at this LINK. Jim was discussing the letter sent by a lawyer (Paul Haefling) to the MOH, the premier and other officials, which warns of "gross negligence" and the fact that the warnings posted by Canada Health were ignored.

The letter, dated March 11th, 2013, was sent to the Minister of Health, the Premier, the Attorney General of Ontario and others. It states that the Minister of Health office is ignoring Health Canada’s warning from September 2012 about poor testing, in that their department has published guidelines that entrench the very same tests into the Ontario lab system, completely ignoring Health Canada’s warning which came ahead of the Ontario lab guidelines.

1) Current tests for Lyme disease miss the diversity of the genus of Lyme bacteria (shown in the early 1990′s);
2) Most species within the Lyme genus DO NOT cause a rash;
3) Chronic Lyme disease is a real and serious entity misdiagnosed as everything but Lyme disease;
4) Lyme is not rare in Canada, but is rarely diagnosed;
5) Lyme is everywhere that birds fly.


Read or download the complete letter by Paul Haefling.
Read the summary of the letter on CanLyme's website.


Thank you for reading this blog!

Posted by MeerkatMarlene at 7:11 PM

Good for you for advocating. I blame the physicians, they are the barriers for our system.
Cheers from Cottage Country!
/hospice volunteer