To everyone stopping by this blog -- my apologies for being Missing In Action! Apart from some health issues, we also had to do a quick trip to find the sun in Florida, using some points and airmiles or risk losing all. We just spent time reading and relaxing, really. I enjoyed a few swims in the warm water, savouring the taste and feel of the ocean again. Dear hubby was sick and spent most of his time trying not to move too much or risk coughing and losing his breath! 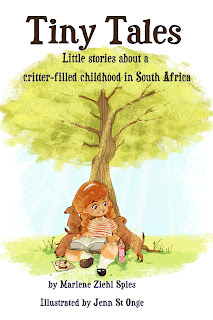 But --- the excitement is that a work that Jenni and I have been working on, is now available as an Ebook in a variety of formats, for Kindle, Nook, Sony, Kobo and others. If you don't have an electronic reader, the book can also be downloaded and read on your computer.

You can download a sample after registering for free at Smashwords, where you might also find many other books for free or purchase. LINK

Tiny Tales is not really a children's book, although it is perfectly safe for children to read, of course. You can read this anywhere, while waiting for an appointment, or to give as a gift to someone else. Jenni's wonderful illustrations add so much to the little stories, which are indexed so you can jump around.

We hope to work on more stories, and maybe a follow-up edition or something now that we have done the initial work to see how e-publishing works. It is not as easy as I thought a little book like this might be, and many, many hours went into the preparation!

I grew up with meerkats as pets, and have played with many unusual pets, like chameleons, hedgehogs and even a snake. Jenni loved the stories told in conversation and asked me to try writing a few for her to illustrate. Her dream is getting into the illustration industry.

She takes commissions as well! She uses many different styles, depending on what she is doing.

Please let us know what you think about this first combination effort? Thanks!


Posted by MeerkatMarlene at 10:58 PM 2 comments: Links to this post 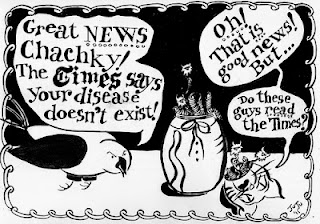 CALL TO ACTION:
Lymies or family members of Lymies in the area near and around Toronto, Ontario - if you can attend a hearing this Thursday, December 6, from 11: 00 am, please read on!

Lois wrote and gave permission for her history and the resulting hearing which will be on Thursday, to be shared on this blog.

Her voice is heard in the post below. Remember all Lymies have brain fog, so if I've missed something, you would understand if you have someone with Lyme disease, known as a Lymie, in your life ..... floor over to Lois.

I am herxing (great timing eh?) so I will give you a brief summary.

Got sick 2004, saw 35 Canadian physicians, was misdiagnosed. In Dec 2009 I paid $2358.00 for a PET scan which showed inflammation in my brain typical of Lyme disease. Have been in treatment ever since...hugely improved, but fighting rashes and painful skin inflammation and low adrenal function. It is nasty but I originally had about 40 symptoms and am now down to 6.....but they are a really mean 6!

One of my symptoms which I became aware of after a surgery in 2008 was that pain medications, anaesthetics etc. would cause paradoxical reactions.....I would actually go somewhat psycho and would remain paranoid, anxious etc. for months after.  I did not know why at the time I just knew it happened.
Early 2009 went for colonoscopy, informed doctor about my strange reactions to sedatives, anaesthetics etc...he ignored me, gave me Versed, I went into a major panic attack...it was horrible. I took that doctor to College of Physicians and Surgeons and then to the appeals board and did win a ruling against him for being rude to patients but as I had only told him verbally about my drug intolerances I could not get him on that.

I went to the local hospital and made sure they had all of my drug intolerances listed on my chart.

In mid-2009 I ended up in emergency via ambulance as I had a diverticulitis attack (no big deal; I know how to deal with that) but I had collapsed on the floor of my house and when I came to my brain was not able to make my body function for about 30 minutes (lack of blood flow to the brain). Emergency did some testing and found a nodule on my lung by accident. They were not checking my lung it just got included in the test they were doing. I was admitted to the hospital by a Dr. AB. I told him about my paradoxical reaction to Versed and my prior reactions to pain meds etc. He pumped me full of morphine and Stemetil and I lost my mind. When they stopped the drugs I signed myself out of the hospital so Dr. AB, rather than admitting a medication error, said he thought I was psycho when I was admitted, although in his notes on my initial consultation he said I was pleasant and anxious but in no distress. “Psycho” is what he left on my discharge papers so that is what was left on my hospital chart. (I have locked down that portion of my medical files.) It took me months to recover. I went through the Privacy Commissioner, the Hospital (by now I knew I had Lyme), the College of Physicians and Surgeons and finally the Appeals board where I won my case. My case got sent back to the College for another review.

The College of Physician and surgeons on the second review of my case noticed that the nurse had not initialled beside the drug Stemetil so therefore said I was never given the drug. I had gone after the Doctor for the Stemetil but there is lots of paper work which notes that I said that I was not sure which drug made me flip out. I am back at the review board again now pushing the morphine instead with more proof which I got from the hospital about the fact that my prior drug reactions were on file at the hospital. Also, the College made a rather big error. They stated that I had been given morphine in prior medical procedures and I did not have a reaction, which is true, until Lyme the drugs acted normally on me. But I had only given the College permission to view my hospital records for the 4 days I was in the hospital....

So, I have written a lot of letters to a lot of people and I am always pushing the Lyme angle and have written scathing letters to the College etc. but when I am in this review they will not let me get too far into a discussion about Lyme or they will cut me off pretty quick but I have a presentation which will be brief. In much of what is being discussed I will not be saying that much about Lyme but they all know why I am there.  I made a huge deal in writing about Lyme disease because they are forcing me to come to the review at this time and I am not well enough to do so. They would prefer that I do it by phone. I will go in person if it kills me! (I had a terrible summer; my GP thought I was dying, so did I...went on Suprax and I am coming back but I am very weak.)

It would be great if anyone could come to the review. I don't think I will get very far as I am sure the plan is to shut me up but I have made a lot of noise about Lyme and that was always my objective. Anyone who could just sit through the review would be appreciated. I have always said I would go for media attention ....it is too small a case to interest any press but the people at the review will not know who anyone is so I am just trying to make them worry. I have won twice in the past....so I might win again if this herx will stop by Thursday.

PHYSICAL ADDRESS AND TIME
The Health Professions Appeal and Review Board is located at 151 Bloor St W, 9th floor, on the south side of Bloor just east of the St. George subway stop.

If anyone has their Lyme T shirts it would kind of neat. I think you have to sign in.
If anyone questions your reason for being there you are simply from a Lyme support group and are concerned for my health during the hearing or whatever sounds good to you.

Because this is the second review much of the original material will not be covered so you may not totally understand what is going on, but anyone who could take notes etc. would make the College very uncomfortable.  Tape recordings are forbidden.

This is a lot to ask of anyone ... so I will understand if no one attends but if anyone is well enough and would like to see how these types of reviews are handled I would really love the company.

The more fuss we make about the Lyme the better it will be for the people coming after us. More and more Canadian doctors are becoming aware of Lyme....we have to keep pushing.

Good luck with your new Lyme meds....it is always scary starting a new one.
Lois MacLean