Friends, family, acquaintances and strangers - thank you for every letter or email written after the request in the previous blog post, titled "Let's Write!" I'm way behind with updating this blog and have been sitting on the update for several days. My apologies. Again.

In short, we needed to ask the powers that be for an extension of the date set for a conference about Bill C-442*.


Our letter writing action worked.  PHAC has agreed with us to send a letter to the new Minister of Health to extend the date of the conference to at least May of 2016.  They called me Friday indicating they had been hearing of many letters suggesting an extension of time and that they will support it.
It should now be a simple rubber stamp of approval for the new Minister of Health (or existing one depending upon the outcome of the election) to extend the date.
Thank you everyone for taking the time to write... we can be a powerful group when needed.

Have you ever felt truly humbled and overwhelmed by the goodness and goodwill of people? I'm not talking about bringing a pot of soup when someone is sick, or flowers when there has been a death in the family. I'm talking about people going out of their way to organize and arrange an outpouring of love, a support that transcends towns and counties, spending their time, energy and money to create a festival of fun for people to get together, to show support as we go through a difficult time.

Bonnie is a force of nature with a heart of gold. I think she might be able to arrange for snowmen to dance if she wills it hard enough. When she heard of Arno and I both going through surgeries at the same time (me: brain tumour; him: thyroid cancer) as posted on this blog before, she swung into action. And swept many other friends along with her.

I knew something was being planned and arranged for the end of September, but requested it being low-key, like a potluck with some games and fun somewhere in the open, just outside the city. As the days before and shortly after our respective surgeries went on, I became aware of some whispers and giggles as friends made plans behind my back. I was not about to spoil their fun - they were planning a surprise and why mess it up? I don't even know how many people have been involved with planning and arranging and don't want to offend anyone! 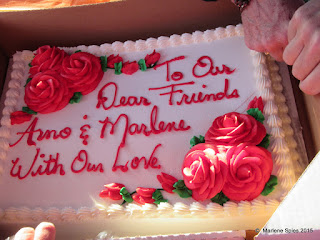 But never in my wildest dreams could I imagine what was being created. When we arrived around 2 pm on that Sunday afternoon, there were tents and tables, chairs and a jumping castle, people milling about playing various games or browsing the used books, someone behind a BBQ to provide food, bowls of chips and snack food, and even a magician. Friends from near and far came over to smile and hug and enjoy our shocked faces. Those who couldn't attend, sent cards and gifts and good wishes. 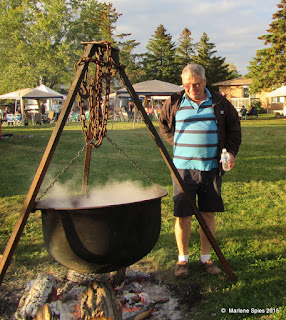 There was a corn roast with corn and kettle to cook them in, donated by Gord. When I thanked him for it, he simply said, "You are my friend. I do things for my friends." And that was that.


Various groups of friends from different walks of life could meet and mingle and in some cases even say, "Hey! I know you from such-and-such, how do you know them then?"

I tried to take pictures and talk to everyone, but think I wandered around in shock for most of the day.
Below is a collage of only some of the pictures and people. (Click to view bigger) 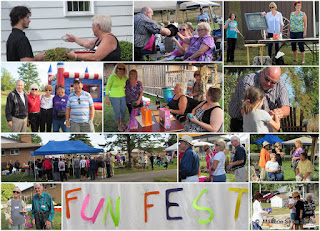 Oh but wait, there is another good news story! It could have been a tragedy, but it turned out to be an amazing tale to tell - and added to my belief that there is no such thing as coincidence.

Friend Anne B and her husband Trev are long-time friends. We even shared a hotel room together way back in 2000, in San Diego. The three of us. But that's another story.

Trev and Anne were some of the first arrivals at the Fun Fest. She made sure to wear a bright green top in support of Lyme disease. When I looked around for her after I gathered about some of my wits, she was nowhere to be found. And then the story came out.

Trev was chatting with Ralph. Suddenly, one of the annoying yellow bees (wasps / yellow jackets) stung him on his hand. Within minutes, he started swelling. And we were at least twenty minutes from any of the four nearest hospitals. Ralph called for his wife, Anne K, to bring her EpiPen®. It was administered and Anne B took off to a hospital with Trev.

By the time I heard of the story, since friends were hiding it not to spoil our fun, they were at the hospital and Trev was getting treatment. He was put on IV and given another shot. The doctor said it was "a very close call". The EpiPen® gave him time to get to the hospital and for more treatment.

Here comes the amazing part. Anne K usually only takes one of her two EpiPens. Trev had never needed one before. That morning, when Anne K was switching purses, she looked at the EpiPens, noticing that one would expire in Nov. 2015 and has never been used. She decided on a whim to take both along that day. Coincidence? No such thing!

The day ended with a rousing game of horse racing --- involving plastic horses, numbered squares, dice, lots of yelling and much laughter,

It was a day of great fun.
It was humbling.
It was amazing,
It was healing.

If I haven't yet thanked you in person, sent an email or made a phone call or sent a card to thank everyone for what they had done to make this an unforgettable day, please forgive me. Know that we are overcome with your kindness and generosity. We can only try to pay it forward. 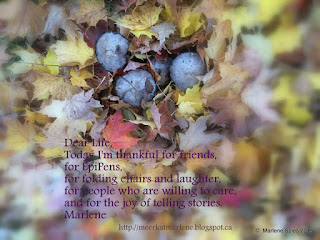 Dear Life,
Today I'm thankful for friends,
for EpiPens,
for folding chairs and laughter,
for people who are willing to care,
and for the joy of telling stories.
Marlene


Posted by MeerkatMarlene at 4:11 PM No comments: Links to this post

I'm several blog posts behind --- time seems to be hopping out of my hands! My apologies. I'll get to post the story about an amazing party held for us on September 26 (post added), about a visit to a quaint town in upstate New York and about dipping a toe (literally!) into the waters at the very southern tip of Canada. But first --- an important post and request for help if Canada is to set up a federal framework to deal with Lyme Disease. 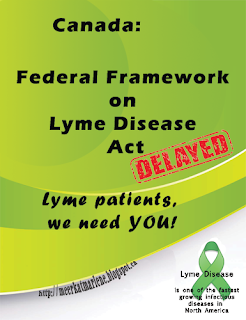 As per Bill C-442 *, the Lyme Disease Conference is required to be held by December 16, 2015 - but Health Canada hasn't planned for the event. There is no venue, no agenda, no date confirmed, no budget and no invitations to attendees.
Time has run out to stage a professional conference.

Jim Wilson has sent the following information and background:


The first meaningful meeting was set in August - but then the election was called for October 19.

Once the election was called, the Public Health Agency of Canada claimed that they could no longer talk to the chairpersons until after the election because election rules of Caretaker Convention applied which stipulates that only routine government businesses can be undertaken.

As a result the chairpersons have not been able to plan for the conference as required under Bill C-442 and in no way can they effectively execute a professional medical conference in the 7-8 weeks between October 19 and December 16, 2015. Medical conferences typically require many months of planning.

Currently there is no budget for this conference, no venue, no date, and no attendees.

They have sought advice from insiders and found that we can ask for an extension to the requirement that the conference be held by Dec. 16th this year - if major stakeholders agree. We want that date extended by at least six months, preferably into May 2016.


Each Lyme patient is an important stakeholder.

Please use your own words to get the following message through:

Due to bureaucratic delays in not appointing chairpersons to organize the conference until the election was called, no discussions have been allowed and will not be allowed until after the election due to Caretaker Convention rules. There is no budget, no venue, no date, and no selection of presenters or attendees. In no way can a professional medical conference be structured with stakeholders in the few weeks following the election until Dec 16, 2015.

I am asking for your support in requesting an extension to the time commitment under the legislation for the medical conference to be held, moving that date forward to May 2016.

Only then can a properly structured conference be executed that will meet the good faith intent of the Bill that received unanimous support from all parties. The issues of diagnosis, treatment and surveillance are complex, requiring experts from various fields of science and medicine to provide input.

Looking forward to your reply."

The people to write to are:

And very importantly, to the federal Deputy Minister of Health which can be done at
http://www.hc-sc.gc.ca/contact/ahc-asc/deputy-sous-eng.php

If you wish you can also send cc's to your local party candidates.

Thank you for taking action and for sharing this message with other Lyme patients in Canada! Every person counts. Together we are stronger.

Posted by MeerkatMarlene at 4:07 PM No comments: Links to this post