As stated many times, my biggest concern is about the children getting bitten, getting sick, and not diagnosed until the disease had taken a hold in their little bodies. They don't know the feeling of being healthy; they go through so many changes. And we, as adults, are quick to self-diagnose as growing pains, too much sun, not enough water, and a lot of other explanations.

I'm not saying every little symptom might be Lyme Disease, but due diligence in this case might be really good. Case in point - two bites on two young children, with the parents not knowing where to turn. One day soon, this MUST stop and doctors would be quick to act, unafraid to treat, and the whole system will benefit from it. I can dream, can't I?

[Early in July 2013, from the child's mother:]
I went to my family Doctor because of a rash on my son, who just turned 3.  We went camping for his birthday.

Our doctor suspected Lyme disease and gave us a prescription of amoxicillin, 6 ml, three times a day for 10 days. He said it could be that or ringworm, but wanted to be on the safe side and gave a prescription.

I didn't notice an actual tick bite after this trip, but last Monday he started with a rash. I thought it was just a bug bite. It started to get bigger and bigger. I gave him some Benedryl, which did nothing. When it lasted a few days, I thought, maybe a spider bite. Then it just went all over him: his chest, bum, arm, leg. That's when I made the doctor's appointment. He has also since started complaining of sore stomach and legs (he points to knee area specifically). I thought maybe just growing pains.

One month ago we were camping and found a tick in the bed he and I shared. But I checked him over, and everything looked fine.

I am very worried and would like to see a doctor who has more experience with Lyme Disease.

[Reply from dr. Ernie Murakami:]
The rash is more generalized  and large. The dose of antibiotics is correct, but the length of treatment is too short.

[Three days later, from the mother:]
I was able to get 3 additional weeks of meds for my son, so 31 days total. I hope he will have no further complications.

[Two weeks later, from the mother:]
He had been responding well to treatment, but has been complaining about headaches and stomach aches. His behaviour was so much better but has seemed to be erratic again. I'm hoping for the best outcome from his antibiotics, but am still worried.

SECOND TODDLER - Peel region
On the same day as the original email from this boy's frantic mother, I received another email and picture. This time it was a little 2-year old who was bitten. 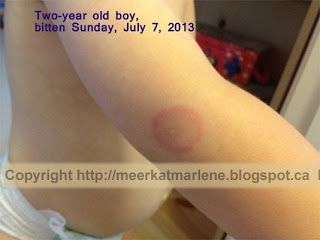 Quote below:
My son who is 2 years old was bitten by a tick and has the tell-tale target bite on his elbow. We went to our GP today and they gave us a ten day treatment of antibiotics.  I just want to confirm I am doing everything I can do to make sure if he has Lyme we do everything now to make sure he is rid of it.  My brother in law has been living with Lyme for many years and we are well aware of it's harmful effects.

[Reply from Dr. Ernie Murakami:]
"You should insist on 4 weeks minimum on this child with this rash since it is a little larger than usual target rash."

PROTECT YOURSELF FROM TICK BITES

As the August long weekend here in Ontario promises to be sunny, bright and beautiful, please remember to pack care and prevention along with your swim and picnic stuff! Bug spray with DEET, socks covering the bottom of light, long pants, and stay on the path while hiking - those are the three main things.

Check your clothing and pets for ticks because ticks may be carried into the house on clothing and pets. Both should be examined carefully, and any ticks that are found should be removed. Keep the tick by putting it into a sealed baggie with a moist piece of paper towel or cotton wool. Placing clothes into a dryer on high heat for 30 minutes effectively kills ticks.

For those who are squeamish about bugs, watch this short little video talking about this serious problem in a light-hearted way:

Posted by MeerkatMarlene at 11:41 AM No comments: Links to this post