Sunnybrook not so sunny

Since the severe reactions and my body rejecting the meds in December and January, I've had to set up drug allergy testing at Sunnybrook Hospital. For those not in the GTA, that's way across the city, driving along the super-highway named 401, the busiest in North America, and not something I fancy!

So, date made in early March for June 8th, at 7:30 am. Psyched myself up for the drive and managed it with not too much stress - other than the borrowed GPS sucky cup thingy dropping off in the middle of the drive and scaring me half to death!

Arrived at the Hospital at 7:00 am with nobody yet waiting, which was very pleasing, knowing that the 5 hour ordeal can start pretty soon! Until I tried to report to the office and was faced by an irate woman, who told me there were no tests scheduled for June 8th, that she has been there for three months and there never has been a test for that date.

When I pulled out the original sheet with the handwritten notes (by the clinic attendant, no less, very distinct handwriting), showing exactly that date, she became even more agitated, told me she was alone, had no nurse, and what did I want her to do? 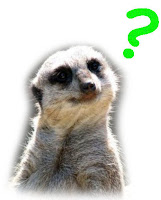 My reply that I had sent a fax two days before the test, to list meds and supplements and to ask if any should be dropped for the allergy test on June 8, she tersely said she gets 40 faxes a day, has no time to look at them all, and is "a lone paper-hanger".

Yes, I've filed complaints with the hospital immediately, but still haven't heard back (3 days later). So wrote a letter and mailed that off today. I have to go back next Friday for the test to take place, even though the original nurse told me that drug allergy testing is only done on Wednesdays. Hopefully this one will be confirmed properly before the trek is attempted again!

Positive notes: I braved the 401 and survived it without making dents in the steering wheel and chewing lips and cheeks to pieces! So, it is a practice run for the next three times to go for three different allergy tests (Zithromax, Penicillin and Cephalosporins).
Posted by MeerkatMarlene at 10:15 AM