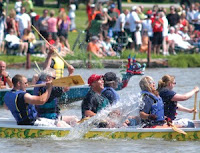 Some people might know that I was infected near Picton and Bloomfield in the Bay of Quinte in 2007. I reckon it might have been while taking pictures of dragon boat races.

My friends, Sue and Dave, were our hosts during that visit. She is now very active about getting Lyme Disease awareness in that area. On April 21 their Women's Institute had a well-attended seminar about the disease. Christine Heffer attended, as you will see in the article which is linked below.

Here is Sue's email from that evening --- and then the wonderful follow-up which happened this week! I never did get around to posting Sue's report on this blog after the successful seminar, but maybe it is just as well to have waited!

Sue writes on April 21:
"Tonight went really well and every chair in the hall was taken with people standing.
As I walked in tonight Sandy L., our Women's Institute Advocacy person, said: 'Your Lyme Program is tonight!' I didn't realize that it was my suggestion that got the ball rolling but the institute can't ignore the results tonight. The press was also there.

"The health department presentation was good but soon it was obvious that their hands were tied as far as treatment.
"A lady from the audience asked if we could hear from the two women who had identified themselves as Lyme positive. As the program was ahead of schedule the floor was given to them for almost 20 minutes. Everyone became frustrated and Dave spoke to the need for change in educating doctors and having the whole system more proactive. This received applause.

"Then the Vet spoke and it was a total flip side for dogs. There are good tests that can be done in the office and results in 15 minutes.
A good vaccine, and why not give antibiotics if there is a reasonable suspicion. Also a follow up, more accurate test is available on an ongoing basis in case the Lyme doesn't present itself for months.
Advantix works to repel before a bite occurs.
He was very careful to present all this for animals only and is trying to get the board of health and the medical board all talking together but for now it sounds like we should put on a fur coat and go see our Vet."

That was not the end of the story, though! The next part shows how very important education and awareness is. Last night I received the following email from Sue, as part of a conversation with Sandy:

Conversation dated June 13:
"Just to let you know that I think that our presentation may have been helpful in getting the local doctors to pay attention.
After the presentation, my brother,  who drives charter buses, was on a one week tour of the North Carolina area. He found a tick on his stomach, he saved the tick and took it to  the doctor here when he returned. The doctor immediately put him on  antibiotics and sent the tick away for testing. The results came back in just a few days. It was negative but he stayed on the medication  anyway.
At least some of the doctors are on the ball."

What a great follow-up story! It clearly shows how important for doctors as well as the public to be aware and alert, and how to avoid a possible epidemic.


Lyme Crusaders deserve Praise!
Read about the Richmond Hill group, and the support they give to Lymies. The article was in the Markham Economist & Sun's Editorial section (link below). It starts off as follows:
"The courage and outspokenness of a small group of Richmond Hill activists deserve commendation this spring, especially as their issue is poised to be raised on Parliament Hill next week. ...."


Links mentioned - and remember the festivals: 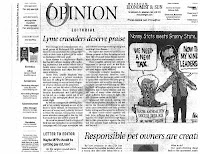 Posted by MeerkatMarlene at 3:21 PM